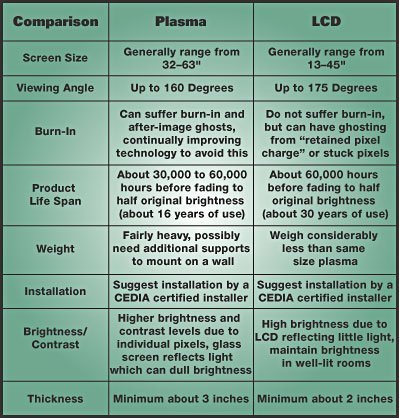 Plasma vs. LCD
When choosing between Plasma and LCD, you are actually selecting between two competing technologies, both of which achieve similar features. To complicate the decision-making process further, price and size are two previous considerations that are rapidly becoming non-issues as LCD TV's are now being made in larger sizes and almost at competing prices as Plasma.
Despite their similarities, the two technologies are very different in the way they deliver the image to the viewer.

Plasma's technology consists of hundreds of thousands of individual pixel cells, which allow electric pulses (stemming from electrodes) to excite rare natural gases-usually xenon and neon-causing them to glow and produce light. This light illuminates the proper balance of red, green, or blue phosphors contained in each cell to display the proper color sequence from the light. Each pixel cell is essentially and individual microscopic fluorescent light bulb, receiving instruction from software contained in the rear electrostatic silicon board.

Whether spread across a flat-panel screen or place in the heart of a projector, all LCD displays come from the same technological background. A matrix of thin-film transistors (TFTs) supplies voltage to liquid-crystal-filled cells sandwiched between two sheets of glass. When hit with an electrical charge, the crystals untwist to an exact degree to filter white light generated by a lamp behind the screen (for flat-panel TV's). LCD TVs reproduce colors through a process of subtraction: They block out particular color wavelengths from the spectrum of white light until they're left with just the right color. And, it's the intensity of light permitted to pass through this liquid-crystal matrix that enables LCD televisions to display images chock-full of colors-or gradations of them.